Arrangement in Grey and Black No.1, famous under its colloquial name Whistler's Mother, is an 1871 oil-on-canvas painting by American-born painter James McNeill Whistler. The painting is 56.81 by 63.94 inches (144.3 cm × 162.4 cm), displayed in a frame of Whistler's own design in the Musée d'Orsay in Paris, having been bought by the French state in 1891. It is now one of the most famous works by an American artist outside the United States. It has been variously described as an American icon.

In the movie Bean, the Grierson Art Gallery is given a donation of $50 million dollars by General Newton to buy the painting. Mr. Bean sneezes on the painting and when trying to remove it with a napkin, he discovers that he had a broken pen in his pocket, and covered the face with blue ink. In panic, he takes the painting down and tries to clean it, but knocks it out of its frame, and steps on it.. He runs to the janitor's closet and applies lacquer thinner on the face. He is relieved, as the blue ink disappears from the painting, and he happily puts away the lacquer thinner. However, when he turns around and sees the painting again, he'd added the wrong type of paint thinner, causing bubbles in the paint. In shock (again) he desperately tries to remove the bubbles from the painting, but instead he rubs all the paint off from the face. Not knowing what to do, he draws a cartoony, childish-looking face on the white spot and quickly takes the painting back to the room where it was being kept before.

He quickly locks the door because someone is trying to come in, and for safety reasons he pulls a big plant in front of the door to prevent it from opening. Instead, David Langley, his colleague, enters from the other door, which Bean hadn't noticed. He sees the painting is not on the wall and Bean shows him what he's done, horrifying David, who thinks he'll be fired and sued for this. The painting is put back and David and Bean leave.

In the same night, Mr. Bean breaks into the museum, distracts the security guard by mixing an entire bottle of laxative into his cup of coffee and changing the men's room key with another key, to keep him out of the security office to buy time, so he won't be seen on the cameras. He then swaps the painting with a poster of it, sticking it onto the frame with chewing gum, and proceeds to cover the poster with raw egg yolk and heating it with a hairdryer, making it look like a real painting. Mr. Bean kept the actual painting for himself, and later took back his home in London, where he hung it on his bedroom wall. 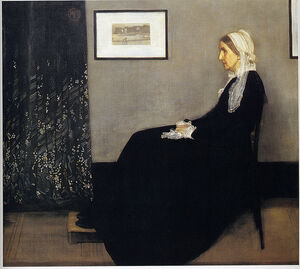 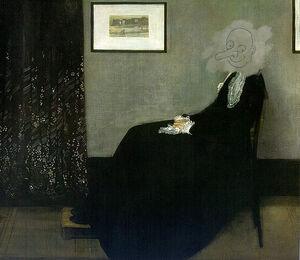 Mr. Bean's restoration of the picture