Mrs. Wicket Mr. Bean (In Some)

Scrapper is the secondary antagonist of Mr. Bean: The Animated Series. It is Mrs. Wicket's extremely hot-tempered and ugly one-eyed cat who despises Mr. Bean, It fondly enjoys Mr. Bean's failure and distress and will always try and make life worse for him. This feeling is equally reciprocated by Bean, as he too enjoys tormenting it (even getting it nearly killed at one point, albeit unintentionally), but can only do so if Wicket isn't looking, as she is extremely fond and protective of it. It has very sharp claws and teeth, which it uses for ripping things up.

He is very honest towards his owner,he is a cruel one who get happiness seeing Bean's failure,he is mostly seen with Wicket so he is the one was always with Wicket.

It is unknown why Scrapper hates Bean, since he is the one who saved it from the two bad guys that wanted to throw him in a river and gave it away to Wicket when it was a kitten. However it may be assumed due to his owner Mrs. Wicket have dislikes to Mr. Bean which gave him influence in hating Mr. Bean. 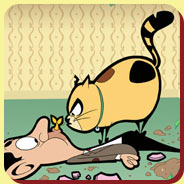 Scrapper as a kitten

A photo of ms.wicket and a young scrapper.

Your such a naughty puss!

Scrapper destroying a roll of wallpaper.

Scrapper falls from the sky

Scrapper refuses to come down.

Mr.bean preparing to throw scrapper outside.

ms.wicket and scrapper in a photograph, seen in dead cat.

Scrapper in a photo

Scrappe's evil grin.
Add a photo to this gallery
Retrieved from "https://mrbean.fandom.com/wiki/Scrapper?oldid=12923"
Community content is available under CC-BY-SA unless otherwise noted.