In the first episode, almost every sketch began with Mr. Bean and the Reliant Regal. Later episodes showed it much less and it was only seen occasionally.

Mr. Bean - In between sketches, Bean is seen driving to his next destination. During these intervals, he is seen running the Reliant off the road from behind, from in front and bumping it out of its parking space at the church. At the end of the episode, the Reliant is seen about to make a left turn at a T-intersection, but quickly hurries off in the other direction after seeing Mr. Bean crash his Mini.

The Curse of Mr. Bean - Mr. Bean, eager to get out of the car-park without paying, reverses all the way back to the end of the floor facing the entrance. He prepares to race in the direction of the next vehicle to enter, forcing it out of his way and allowing him to leave. This vehicle happens to be the Reliant, which topples over after clearing Bean's exit. This is the only Reliant gag in the original series to be of plot significance.

The Trouble with Mr. Bean - Bean pushes the Reliant out of its parking space outside the dental clinic and onto a yellow line, where it is given a parking ticket.

Tee Off, Mr. Bean - Bean attempts to hitchhike back to the golf course and the first car that pulls up is the Reliant. Bean ignores it and it drives off.

In Artful Bean, gloves are seen on the steering wheel, which makes the driver's nationality a mystery.

The driver of the Reliant is the primary antagonist of the 2015 animated episode, Car Wars. In this episode, the mystery driver becomes obsessed with getting first revenge on Mr. Bean after being run off the road yet again. Mr Bean ends up being given a taste of his own medicine in this episode.

In the episode Young Bean, a younger version of the driver is seen in a flashback.

The Regal in 'Missing Teddy'

The Reliant in Restaurant.

The Reliant, right before sliding into a bay. 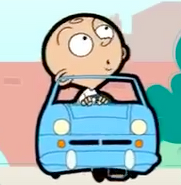 A younger version of the driver.

The hands of the driver, seen in Artful Bean.

The driver stalking Mr. Bean once again, a reference to Christine.

Mr. Bean tries to talk with the driver.

Mr. Bean tries to confront the driver, only to find nothing.

The Reliant's interior, as seen in Car Wars.

Reliant crashed into a red car

The musician beating up the Reliant driver.

The Car Was Same as Tomber in Disney Pixar Cars 2.