Missing Teddy is the second episode of season 1 in the animated series.

The episode starts off with Mr. Bean looking in his fridge and writing a grocery list. As he enter the living room, he notices the TV with a cop holding a teddy bear, and then shows two criminals. It appears the cop is warning that the two criminals are thieves, and steal teddy bears. Not wanting Teddy (who was on the couch watching TV) to see what was on TV, he covers Teddy's eyes and shuts off the TV.

While at the store with Teddy, he grabs a jar of strawberry jelly, but then grabs a jar of honey. After a bit of a debate and then asking Teddy, he decides on the honey. After proceeding on to his other unusual tasks, like buying one tomato and one pea pod, he spots a person in a stroller stealing food from a stand. He starts to tell them to put it back, but, when he sees it's a 'baby', tries to calm it, to no avail. His 'mother' then turns around, but Bean had already hid behind a stack of boxes.

As the two leave, Bean grabs a can of tomato sauce/soup/chunks, and then notices Teddy isn't in his cart. Outside the store, it is shown the 'mom' and 'baby' were actually the two thieves he saw on TV, and had stolen Teddy. Bean rushes outside, still looking for Teddy, just as the thieves drive by, the one taunting Bean.

Bean gets in his car and pursues them, nearly causing multiple traffic accidents along the way, and manages to cause trouble for a blue car by pushing it into a delivery truck full of glass. One of the crooks then throws 'Teddy' out the window, with Bean veering off the road and into a tree. He spends all day in the forest looking for Teddy, and then spots him on a tree branch. He grabs him and then takes him home.

Afterwards, he takes Teddy to the vet, getting weird looks from another person waiting there. The veterinarian shakes Teddy, with an apple rolling out, revealing it wasn't Teddy, but just the one crook's shirt twisted with an apple to look like Teddy. While leaving, he gives a girl the apple, and notices their duck that they have, quacking loudly. He slaps it, causing it to spit out a fish, which in turn causes a cat to lunge for it, breaking a bowl that was stuck on it's head, with a dog chasing the cat, breaking the stick that was stuck in it's mouth. The stick hit's a pitcher of water, spilling on a bird (which looked non-responsive or dead), causing it to startle awake. With their problems solved, everyone leaves the room. As he leaves, Bean spots a poster showing a missing cat.

He is then shown hanging up signs showing Teddy, when the same cat on the missing poster appears. Not knowing, he shoos it away. While at the police station later, he asks an officer if he can put a poster of Teddy up, with the officer pointing at a wall. As Bean looks, he sees fifty-two missing teddy bear posters on the wall.

At the crook's hideout, the smaller one grabs Teddy, along with two stuffed socks, and gives them to his partner, who sew them on. After being hung on a line, it is shown that the thieves' intent is to put long ears on every teddy bear.

The next day, Bean spots a boy with a teddy bear, but with odd ears. He follows the path the boy came from, and finds a van with two people selling teddy bears. Upon looking at the van, he spots Teddy among the others. He then pulls a length of rope out of his jacket, tying one end to the bumper of his car and the other to the rope on the van (from which the teddy bears were hanging). He speeds off with the teddy bears in tow, with the crooks noticing, who get in their van and chase after Bean. After driving over a bridge that gets the criminals' van stuck (due to it being wider), Bean hides in some bushes, snickering.

The thieves, after climbing out the windows of their van and then into the lake,they spot a teddy bear on the branch of a tree. After going over to try to and steal it, Bean emerges from the bushes in his car. He circles the thieves, causing the rope to wind around them and tie them to the tree.

Later, the two crooks are arrested and put in a van by an officer, while Bean cuts off the ears of the teddy bears and gives the out to their owners.

Although Mr. Bean shows very limited speech ability, he does use these words/phrases in this episode:

"What have they done to you?"

Mr. Bean, trying to decide on strawberry or honey.

One of the thieves in the episode.

Mr. Bean for Rescue Teddy and against the Two thieves!

The police officer holding a teddy bear warning the public of the teddy theft crimes.

The unfortunate blue car, right before crashing into the van with glass. 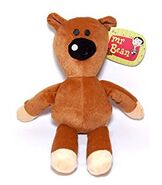 Add a photo to this gallery
Retrieved from "https://mrbean.fandom.com/wiki/Missing_Teddy?oldid=12991"
Community content is available under CC-BY-SA unless otherwise noted.