Irma Gobb is a main character in Mr. Bean and Mr. Bean: The Animated Series. She is portrayed as Mr. Bean's self-proclaimed girlfriend. Of all the characters in the franchise, she is the most able able to tolerate his antics to some extent, due to her being in love with him.

Irma is considerably more mature than Mr. Bean in some respects, such as when she is raising money for a donkey charity or supervising children as a scout leader. Despite this, she has quite a short temper and also can be seen acting just as childish as Mr. Bean sometimes.

On her first appearance, Irma's role was credited as just The Girlfriend; the name "Irma Gobb" appeared for the first time in the book Mr. Bean's Diary (although in that book Irma does not actually become Mr. Bean's girlfriend in spite of his best efforts).

In the Comic Relief sketch "Torvill & Bean", Bean is accompanied by a female companion portrayed by Sophie Thompson whose overall appearance resembles Gobb's.

Irma is shown to be Mr. Bean's girlfriend and makes her debut in Mr. Bean in the episode The Curse of Mr. Bean. where she is seen waiting for Mr. Bean in the cinema and upon his arrival, is given a miniature bag of popcorn, paling in comparison to his own and while already being anxious to look at the horror movie, Irma is constantly tormented by Mr. Bean's]attempt at scaring her, which prove effective right up until the end of the movie, where ironically she managed to scare them both due to having her coat sleeve hanging and as Mr. Bean grabbed it, was frightened by the fact her hand was not there and his scream in turn scared Irma.

In Mr Bean: The Animated Series, Irma]retains being Mr. Bean's girlfriend and made her debut in the episode Birthday Bear where she is seen coming upstairs to celebrate Teddy's birthday, to what Mr. Bean had forgotten about and leaves behind a card before storming off to only later return on the evening with her own stuffed bear named Lottie, where they all celebrate Teddy's birthday via eating a whole cake, playing multiple games and then watching a fireworks display through the window and seemingly forgives Mr. Bean for his forgetfulness by giving him a kiss on the cheek.

Irma is a middle-aged lady with dirty blonde hair that is tied into a bun at the back and dons her trademark glasses, along with a pair of earrings almost at all times, while for clothes she covers her legs in tights, wears a complete cyan coloured dress with matching shoes and can sometimes be seen wearing a long overcoat with a red cotton hat.

Are you alright in there?' 'Her first words in Merry Christmas Mr.Bean

Oh yes, if you're having one.

You got a turkey on?

Do you want a hand?

In Dinner For Two 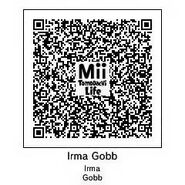 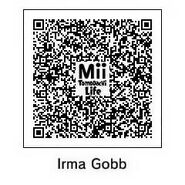 Add a photo to this gallery
Retrieved from "https://mrbean.fandom.com/wiki/Irma_Gobb?oldid=14894"
Community content is available under CC-BY-SA unless otherwise noted.