John Birkin
Do-It-Yourself Mr. Bean is the ninth episode of the live-action TV series. It originally aired over ITV on January 10, 1994.

It's New Year's Eve 1993 and Bean is excited. He has invited his two best friends Rupert and Hubert over to his flat for a New Year party and is putting the finishing touches on his decorations, which aren't much (a circle of chairs in the living room and a bunch of balloons hanging from the front door). He greets his neighbour who is also throwing a party, and goes back inside to prepare for his guests' arrival. Soon enough, Rupert and Hubert arrives they realise that it's not really the party they were expecting: Bean gives his guests party hats made of newspaper, assigns them designated chairs, and the only form of entertainment is a radio. Bean then realizes he forgot to prepare refreshments, so he goes into the kitchen and takes out a tin of Twiglets and a bottle of champagne. However, he discovers there is only one Twiglet left and enough champagne to fill only half a cup, so Bean improvises by using a butcher knife to chop up a tree branch outside his kitchen window and dips them in a tin of Marmite in an attempt to disguise them, and adds sugar to a bottle of vinegar to sweeten it.

As the night goes on, it becomes apparent that Rupert and Hubert are not having a good time. They've uncovered that the "food" they've been given isn't genuine (there's a small leaf growing on Rupert's Twiglet and Hubert is grossed out by the smell of vinegar) and refuse to eat it, despite Bean eating his and pretending to like it. Bean then heads back to the kitchen to get more "snacks", and this time he pours the contents of a bird feeder outside onto a plate. While he is doing this, a fed up Rupert and Hubert turn the clock in the living room to just before midnight, and by the time Bean returns, the clock chimes and they say "Happy New Year!", prompting Bean to say  "Doesn't time fly when you're enjoying yourself".  They then link hands (almost forgetting Teddy) and sing "Auld Lang Syne", although Bean over-excitedly rushes through the song.

Rupert and Hubert then feign yawning and claim that they are tired, so Bean puts the doorknob back on the door (for some reason, he had taken it off and put it into a fruitbowl; this is a recurring gag throughout the episode) and bids them goodnight. Right outside the door, Rupert and Hubert encounter two women who laugh at their paper hats, prompting the men to yank them off in a hurry. They witness the women heading into the neighbour's flat, where a swinging New Year's party is underway, and ponder whether to leave or go to the party, ultimately deciding to do the latter.

Meanwhile, Mr. Bean is in bed and puts Teddy next to him before turning off the light and going to sleep. However, he hears the countdown process at the party across from him as well as everyone singing "Auld Lang Syne". Confused, Bean turns the light back on and gazes at the clock in the living room, which shows that it is 1:40 AM. He then takes out a smaller clock from his chest of drawers, which indicates that it is just past midnight, revealing that the real New Year has started. Bean becomes angered as he realizes that Rupert and Hubert deceived him and attended the party across the hall, and just as he switches off the light again, a person from the party shouts "Three cheers for Rupert and Hubert!".

For the deleted scene, see The Chair.

It's New Year's Day 1994, and Bean rushes to the Arding and Hobbs department store to take advantage of the January sales, nearly running over several pedestrians while parking. Dozens of other people have queued overnight to get in first, however Bean jumps to the head of the queue and stands in front of an alarm clock next to a sleeping bag supposedly containing someone in it. He then taps his watch to indicate that the alarm is about to go off, which it does, scaring the elderly couple sitting next to it. Bean then takes a beanie hiding a cauliflower from under the sleeping bag along with a modeling balloon figure which he pops, revealing that he created the "person" as a dummy and placed it there the night before in order to cheat his way to the front of the queue. The store finally opens, and Bean excitedly runs inside not knowing where to start, so he head downstairs.

Later, Bean has purchased many items, including the armchair that was on display in the window, tins of paint, and an assortment of brushes and mops. After strapping the armchair to the roof, Bean runs into a problem: because he squeezed everything else inside of his Mini, there is no room left for himself. However, he manages to construct a way of driving the Mini while sitting on the armchair. He first places a brick attached to a string in front of the front wheel to hold the Mini, and releases the handbrake. He then uses a paint can attached to another string to operate the clutch, further strings for the gear stick and steering wheel, and joins his mop and broom together to form a long rod with which to operate the accelerator and footbrake. At first, all goes incredibly well, but Bean ends up on a steep downhill slope after swerving to avoid a roadworks barrier. He struggles to keep the car under control as it picks up speed, but things get worse when the head of the broom becomes stuck under the pedals and eventually comes off when Bean tries to get it loose. Now with no way to stop the car, his only braking method is to drive it into a parked lorry delivering mattresses, creating an explosion of feathers.

Back in his house, he pushes the armchair into place and sighs, takes the doorknob off, and puts it in the fruit bowl. He then coughs out feathers. Then he moves the new armchair in place of the old one. Suddenly, he realises  he needs to fill out the hole by the counter because he drops stuff through them. so he goes to the other wall with the measurements obtained by a pencil in his mouth and one in each hand. He then proceeds to drill on the line, unknowingly cutting the strings from a painting, cutting through the right corner of his kittens painting, through the phone line, making the phone stop ringing, at which point he stops because he thought he heard something, but having cut the phone line, it stopped ringing. He then resumes, decapitating princess Diana and prince Charles, going through between legs and up, of a shiny tanned muscular man. Then he takes the rectangle he cut out, and puts it in the other hole.

He takes out the paintbrush but it's dried solid. So he gets out a hammer and starts softening it. Then he goes into the living room, dips the brush into the paint, making the paint bubble and the bristles disappear. So he takes Teddy, tells him to look the other way, and shoves the brush handle (the metal bit rather), into his rear. Then he dips his head in paint and tries to paint the wall but only managing to do a few lines, and getting paint splatter on the nearby lampshade. So he grabs the newspaper, which gives him an idea. he carefully wraps everything in newspaper, exactly as it normally is, including the grapes. He only has the lamp left and only a strip of paper, so he uses the hat, which Hubert forgot behind, to cover the clock. He then comes across a big cracker in a dusty box under the footstool, and he has another idea. He puts it in the tin of paint, lights the fuse, and goes to run out the door, only to realise there's no doorknob. So he hurriedly unwraps the round one, which turns out to be an apple, but the next one's the doorknob, right as the fuse is almost to the point, and he runs out and round the corner and plugs his ears and shuts his eyes.

Right then, Hubert leaves the party in the flat across, all tired and drunk, and realises he forgot his hat, so he knocks on Mr. Bean's door, no answer. So he goes in, and that's when the cracker goes off. Mr Bean goes to look, and sees the exploded tin dripping then white footsteps leaving. He tiptoes in slowly, and closes the door with the tip of his finger and looks around, then sees the old wallpaper in the shape of Hubert grabbing his hat. 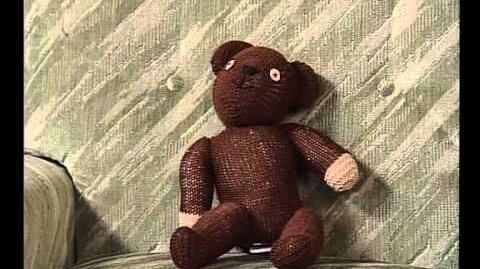